My top ten highlights from the Under The Fable tour. 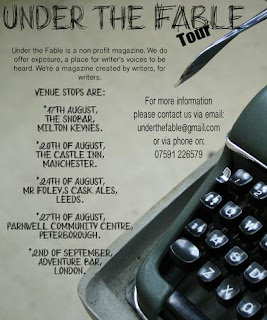 I got home last night at about 01:00am, my poetry portfolio in hand ready to be pushed aside for a little while.  Pouring myself a whisky I sat and reflected on my adventures.  Touring different places in the country was exhilarating, and there was so much to enjoy.  I almost wished I had kept a diary of each event.  Next years tour promises to be bigger though.  There are more places interested in hosting our events, people from cities we didn't reach indignantly asking why we didn't go there.  We promised we will make there nearest venue, and we intend to keep that promise.  But there are always memories to treasure, and a whole new tour won't overshadow the memories created this tour, nor the people that have turned up and shared their words, and their visions.  So, here are my top ten highlights from the Under The Fable 2015 tour.

We were spoiled rotten with our first venue.  Xscape in Milton Keynes allowed us to use their bar.  There were big open windows from the performance area, and all you could see was the ski slopes.  I have never had a backdrop like it.  People skiing, or snowboarding down the slopes as poets such as Melanie Limb performed their poetry.  It felt so holistic, something very natural about it.

Skiers falling down in the back, animated poetry at the front, there couldn't have been anything more authentic.  No blank background, just live sport and fun happening together, each poet looking like an Olympics commentator speaking as the action was going on in the background.  It couldn't have been stranger, or more interesting to perform in this venue.

London, the final show, was probably the most trying performance.  The venue blasted music over the performers, and glass was found in the lime pickle.  Sounds ridiculous, and perhaps it was.  A lesson learned I suppose. But out of that came our opening act Michael Julings.  The talented swine told me he had been writing a mere few months, which I am inclined to hit him over the head for.  The young lad captivated us with his poetry, his easy rhymes, and he taught me something.

Although his poems rhymed, they were stories, with intricate characters and diverse situations.  I am not talking Dr Seuss-esque, I am talking about a very original poet who doesn't simply want to sit and reel off his rhythmic observations.  If you happen to find yourself somewhere near London, and Michael Julings' name is mentioned, then go and find out why.  It was impossible not to like this set.

Parnwell Community centre was another strange venue, not the sort of place you would expect to find a poetic spectacle.  But it worked, and the crowd were responsive and a joy to perform to.  Cue Jo Orbell to the stage.  Such a quirky set, and some very original lines, puns and rhymes, I realised that there is no poet not worth listening to at least once.

One poem in particular, You can't lead a cow downstairs, had the crowd in stitches.  It sounds like such a strange topic to write a poem about, but there she was, spinning her rhymes and keeping the crowd laughing.

OK, poetry wasn't the only thing on the menu.  The Castle Hotel, Manchester, had a wide range of real ales.  I am not going to blame the ale for me tripping over on the stage, but there are people that would.  If you are in Manchester, and you like a good ale, you would silly not to go in and sample.  You might just find some poetry going on too.

6 - From Wales with love

You have to admire the dedication of a poet who drives from Wales to Manchester just to perform.  Stuart Buck, now a blogger for Under The Fable, turned up with his poems, a love for Charles Bukowski, and a tight performance.  The fact that he had taken this trip only affirmed that there is still love for poetry in the UK, and what is a whole other country?

Through his poetry you heard of all sorts of dedication.  Dedication to his children, to his wife, and to the art of wordsmithery itself.  Really glad to convert this man into an Under The Fable regular, and I hope we make it to Wales, so he can have a drink next time.

I am not going to put my own poetry down as a highlight, not only would that be arrogant, but downright misinformed.  But the buzz of performing is impossible not to list.  Performing at these places, whether I fell onto the stage or not, was nothing short of exhilarating.  I am already looking forward to the Under The Fable tour 2016.

Now that got your attention didn't it?  Not as much as J.S.Watts, a published poet and author, when she took the performance space in London's Adventure Bar.  I had not heard poetry like it before, exploring life and ecology through the adventures of Sue, a mechanised humanoid that lived, and loved, in a scrapyard.

To write her own review, J.S.Watts told me her voice could cut cheese at one hundred yards.  But that was only in volume.  Her performance was very aware of the emotions of her own piece.  It was such a breath of fresh air to hear poetry taking on such a brand new, and speculative, concept.

In Manchester, Poet and Radio DJ, Modal Roberts took the stage and gave the crowd the most innovative and exciting performances you will ever see.  There is nobody, and I mean nobody at all, as innovative and original as Modal Roberts.  He would tell us a story about a horse that thinks it is a shark, or a man who was the second man to join a fight club, which pleased the other member who had "been self harming for three weeks".

I could have listened to Modal all night, a chance open mic performer who turned up on the off-chance and stunned the audience into a standing ovation.  The tongue in cheek performance left us with only one message: "one's own bullshit is still bullshit".

Sounds like such a cop out to mention staff at Under The Fable, but none of this would have been possible without them.  Ashleigh liaising with venues, and the performers never seemed to stop.  Meg who traipsed around the country, sometimes even to play chauffeur, with her camera made it possible for all the performers to have their photos branded about the internet, and of course record our adventure.

1 - Variety is the spice of life

I don't want to quote Forrest Gump, or mention a box of chocolates at all, but that line pretty much nails exactly what this tour taught me.  You can't have a preconceived idea of poetry, when there is this much variety.  Dean Cleary's highly religious poetry, Michael Julings' storytelling, Bethany McTrustery's prose amongst everyone elses highly individual pieces proves that you can't just bracket poetry into one small box.

Feeling surprised at every performance made it worthwhile attending.  Plus the contacts and friends you make along the way, it is without a doubt the most liberating experience a writer can endure.

So in 2016, the tour promises to be bigger.  I can imagine in 365 days time I am going to have a much harder time thinking of only ten highlights. 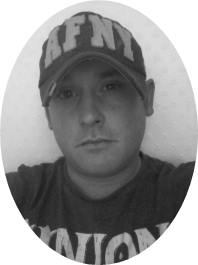 Have something to say?  Please comment below, all feedback welcome.