It is thought ekphrastic poetry originated with Homer, who the ancient Greeks believed was the first and greatest of the epic poets. The earliest known example of ecraphsis is encountered in Book 18 of Homer’s Iliad and describes the Shield of Achilles, created by the god Hephaestus. Homer uses the 130 lined poem to describe every feature of the shield in extreme detail, bringing the shield alive on the page.

A recreation of Homer’s poem was published in 1952 by W. H. Auden called The Shield of Achilles in which Auden uses two different stanza forms. The stanzas were either very short lines or very long lines. The stanza with the shorter lines describes scenes of what Achilles mother would expect to find on the shield, however in Auden’s version, the shield was never made, which I found really powerful. 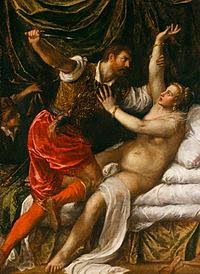 It grew very popular in the Romantic era. A particular favourite of mine from this era was The Rape of Lucrece by William Shakespeare. In 509 BC the son of Tarquin (the King of Rome) raped Lucrece, the wife of the King’s aristocratic retainers Collantinus. After the tragic ordeal Lucrece committed suicide, with the knowledge revenge would be taken. Since, Lucrece has been described as if she were a work of art. In 1571 the artist Titian created an oil painting about this called Tarquin and Lucretia which was Shakespeare’s influence for this poem. Shakespeare’s poem extends to 200 lines, accurately and disturbingly detailing the ordeal Lucrece suffered. Shakespeare is known for many things but one thing that astonishes me about his work is his ability to evoke strong emotions in his readers. In a particularly strong part of the poem he says, “her pity-pleading eyes are sadly fix'd/In the remorseless wrinkles of his face”. I thought this was brilliantly written and really set the story in context for me. I felt like I was Lucrece in moments like this, which I found frighteningly powerful. 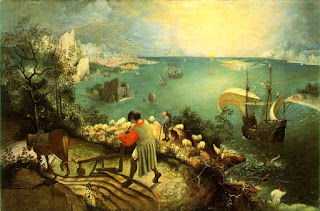 A more contemporary poet, William Carlos Williams delved into ekphrastic poetry in 1960 where he published a poem about the famous sixteenth century landscape painting of the fall of Icarus by Pieter Bruegel (to the left). In Greek mythology Icarus was the son of a remarkable craftsman Daedalus. Daedalus made two pairs of wings out of wax and feathers for him and his son. He warned his son not to fly too close to the sun as it may melt the wings. Icarus ignored his father and indeed his wings melted and Icarus fell into the sea where he died. The painting above shows Icarus drowning while others around fail to notice he is in trouble. It is said Williams was drawn to Bruegel’s presentation of Icarus’s death and how he downplayed it, this is shown by when Williams says “a splash quite unnoticed/this was/Icarus drowning.”

I love how poetry tells a story and sometimes the story behind a painting can become lost when presented with visual beauty, so for writers to create poems from paintings I think is absolutely brilliant. It is my belief ekphrastic poetry can be wonderful and is something that should be explored more by poets. 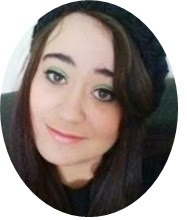 www.underthefable.com
Share your thoughts below. All comments and suggestions are welcome.
Posted by Under the Fable at 00:30